A 56-year-old man is being transported to your hospital following a witnessed ventricular fibrillation (VF) cardiac arrest. Bystander cardiopulmonary resuscitation (CPR) had been commenced with a no-flow time of approximately 5 mins. CPR is continuing, and the current low flow time is 45 mins. You are considering performing ECPR (extracorporeal cardiopulmonary resuscitation) on this patient.

Q1. What is the rationale for ECPR?

Even good CPR is not very effective, generating only approximately 25% of cardiac output.

ECPR can fully support the circulation, and therefore enables time for other treatments to work, such as percutaneous intervention (PCI) in ST-elevation myocardial infarction (STEMI), that can reverse the cause of the cardiac arrest.

The initial rhythm has a large impact on overall outcomes.

Most ECPR studies only include patients with shockable (VF/VT) rhythm. PEA arrests are also included in several papers, and they have may have similar outcomes. However, this is a highly selected group of patients and don’t necessarily represent the outcomes of all PEA arrest patients. Asystole on initial rhythm is almost always fatal, and is commonly considered a strict contraindication for ECPR.

Low flow time is the time from the start of CPR to the commencement of ECMO.

Q4. What is the upper low flow time for initiating ECMO?

Most papers quote an upper limit of between 45-60 minutes, however, this is controversial.

In general, the sooner ECMO can be established, the better the outcome, and taking too long to establish ECMO is often the reason patients are excluded. However many case reports exist of patients with very prolonged cardiac arrests (>1.5hours) surviving neurologically intact. 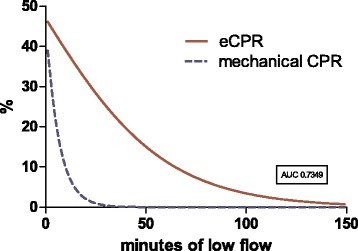 Q5. What are the exclusion criteria for ECPR?

These are considered exclusion criteria for ECPR by the Alfred ICU ECPR Service:

In addition, certain physiological variables are associated with poorer outcomes.

Despite the above list, no single criteria is discriminatory enough to predict a poor outcome by in itself. For example, having one of these bad markers may be offset with many other more favourable markers, and hence an overall good chance of survival. In practice, all variables need to be added together to get an overall picture and chance of success. Team-based decision making is very important.

Q6. Discuss how a more liberal vs a more restrictive selection criteria impacts survival in an ECPR program.

The selection criteria will impact on the total numbers and the survival rate. Designing a system with very strict criteria (eg only young, early, shockable) will likely result in a high survival rate. However this system will have low numbers of eligible patients, and almost certainly miss patients who could have benefited but were outside this criteria. On the other hand, more relaxed criteria will increase the numbers, but the survival rate will be lower. This will also use up scarce resources that could be used elsewhere.

Q7. What is the evidence for ECPR compared to conventional CPR?

Survival in refractory CA over 30 minutes drops to approximately 0-10%2,3. With ECPR, survival with good neurological outcome range can increase to around 10-40%, even up to 30-60mins4,5. There are no randomized controlled trials comparing conventional to ECPR, but observational studies2,3,6,7 and systematic reviews4,5,8 of selective patients have found ECPR to be more effective than conventional CPR2,3,6,7,9. 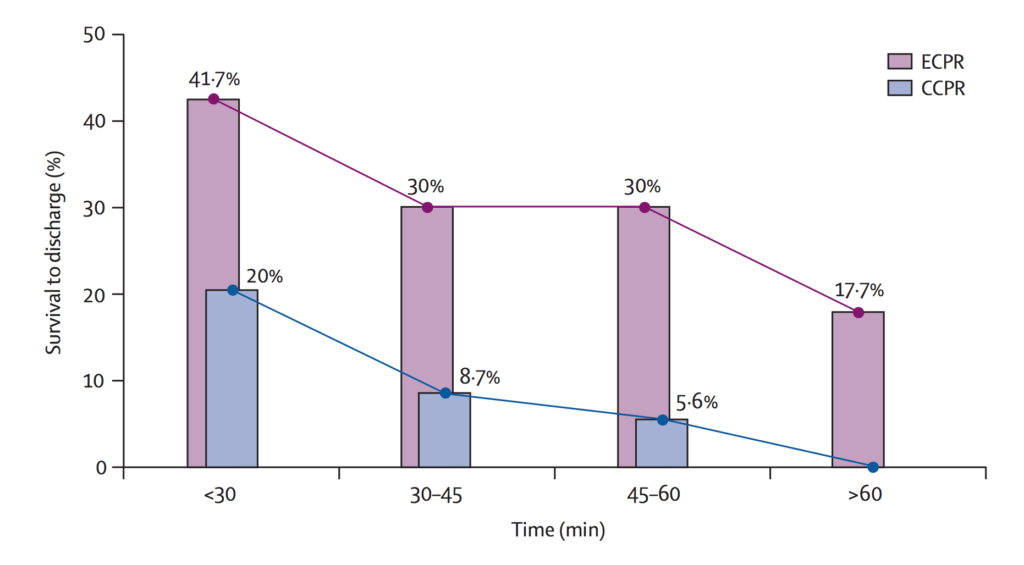 Figure 2. Relation between CPR duration and the survival rate to discharge (from Chen et al, 2008)

ECMO
4 comments to “Staying Alive: Timing and Indications for ECPR”