An obese 49-year-old man is being treated in the ICU for severe bilateral pneumonia. He has been on femoral-femoral VV ECMO for the past 24 hours. The pump blood flow is 5L/min and fresh gas flow is 8L/min. He is ventilated with SIMV PC 15 cmH20 PEEP 15 cmH20 with unchanged tidal volumes of 20ml. His observations are HR 125/min, BP 90/50 mmHg on 0.6mcg/kg/min noradrenaline with oxygen saturations (SpO2) of 82%.

Q1. What initial ECMO circuit checks should be made?

Ensure there is no recirculation:

Ensure the oxygenator is functioning adequately:

Pre-oxygenator saturations are 50%. Post oxygenator pO2 is 450mmHg. An echocardiogram is performed revealing a hyperdynamic LV with mildly impaired RV. The estimated cardiac output is 10L/min. The return cannula is seen in the RA with the tip of the access cannula 10cm lower in the IVC.

Q2. Why is the patient still hypoxaemic? Figure 1. Schematic diagram describing the degree of blood oxygenation at different site’s of the patient’s circulation while on VV ECMO.

Q3. Increasing the pump speed leads to ‘kicking’ of the access line with no increase in pump flow. What are the options at this stage?

Q4. What are indications for high flow ECMO circuit configurations? Q5. How will switching to a high flow ECMO circuit configuration improve this patient’s oxygenation?

Q6. How is the conversion to a high-flow configuration made?

These are the steps involved: Figure 3. Photograph of y connector in high flow circuit. The patient is out of shot on the left and the ECMO circuit is on the right. 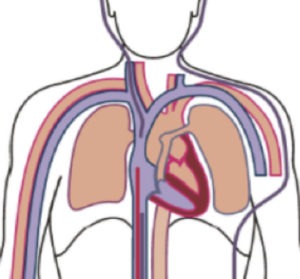 ECMO
3 comments to “Go with the flow”