Nuts and Bolts of EBM Part 5

You are discussing a theory you have with a colleague – that drinking coffee makes you happier. Your friend however disagrees….

You therefore decide to study this question further. You begin by surveying all the doctors in your hospital, asking them if they drink coffee and how happy they are, as well as subjecting them to a battery of “happiness” tests, to figure out their “mean happiness scores”.

Q1. Describe the null hypothesis and alternative hypothesis for this study.

Note: Hypothesis testing terminology can get a little confusing – why do we start with null (no difference) hypothesis? The reason is it is easier to disprove an assertion than to prove that it is true. Note also, that even if the data are consistent with a hypothesis, it doesn’t necessarily prove that the alternative is true.

Q2. Describe what type of data is in the graph above, and what is the likely distribution?

The graph above (a frequency distribution) shows the happiness score of those doctors that don’t drink coffee (grey) and those that do (black). These quantitative data are potentially continuous variables if they can take any value from 0-100 (e.g. 59.637). However, they could also be discrete values if the data can only take specific values (e.g. integers). This would depend on how the happiness score is obtained. Let us assume that the data is continuous.

The data has a normal distribution. Normally distributed data is bell shaped, with two roughly equal tails on either side. The central part of the bell correlates with the mean – which is the sum of all values divided by the total number of observations.

Q3. In the graph above, you notice much variation across the two frequency distributions. What are the causes of variation in this data?

They may also be a result of errors, which include:

The different types of error shown below:

The centre of the target represents the true result. Variation away from the bulls eye in one direction (left) is called systematic error, and this introduces bias. Variation that is random and all over the place (right) doesn’t introduce bias but random error. Both have the effect of reducing the accuracy and certainty of your data. 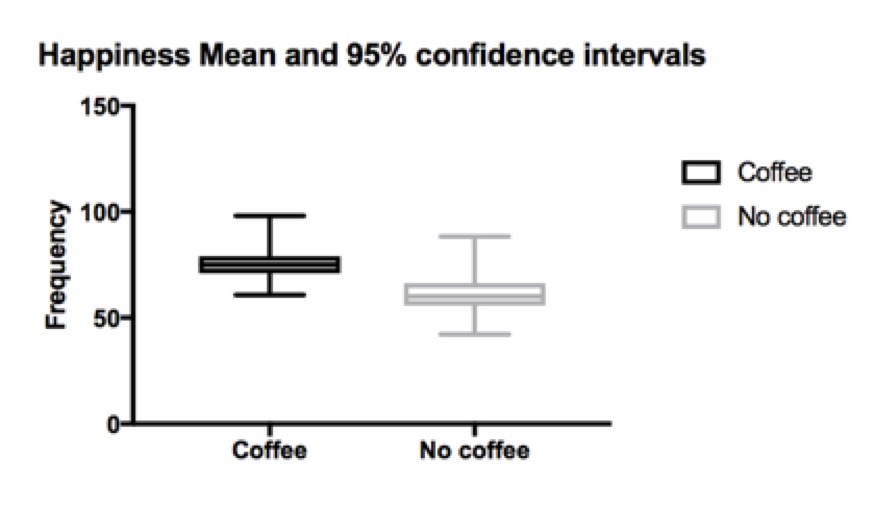 Q4. What do these 95% confidence intervals mean?

The difference of means between the coffee drinkers and non drinkers reflects the interval of values where the true difference lies – in this case 11-18. As this difference does not contain 0, it indicates that there is a statistically significant difference between the populations.

A narrower range reflects a higher degree of certainty. This can be achieved by increasing sample size, or increasing the precision of the measurements to reduce variability.

Next you want to test your hypotheses that the two groups are truly different. Using your statistical chart, you identify the student T test as the appropriate test to perform (comparing two means from independent groups that are normally distributed). You put this into a stats program and you get a P-value of <0.001.

Q5. What does this P-value mean?

The P-value is the probability or likelihood that a difference observed (or one more extreme) might have occurred by chance, if the null hypothesis is true. The smaller the P-value, the greater the evidence against the null hypothesis. It helps us distinguish explained differences (ie a true difference) from unexplained variation (random error or chance).

In our example, the mean happiness score of non coffee drinkers is 61 compared with coffee drinkers at 76. The T test gives us a probability that this result is due to chance (or false positive rate) of P=<0.001. This means there is a less than 0.1% chance it was due chance, and a 99.9% change it was a real difference.

By convention, a P-value of <0.05 is an agreed and acceptable false positive rate for clinical studies. This means that 95% or 19/20 results that show a difference will be a true difference. For an analogy with the courts, to convict a criminal, the jury must find the criminal guilty of the crime “beyond reasonable doubt”, which is a relatively high degree of certainty in the result.

Q6. What are some of the problems with using P-values?

Q7. You talk to your friend and he worries about false positive and false negative results in your study. Please explain these?

When deciding whether data are consistent or inconsistent with the hypothesis, studies and investigators are subject to two types of error. Q8. What does this P-value mean?

Medicine is subject to harms of error in both false positive (the alpha level) and false negative (the beta level) directions.

Why?… Scientists are often trying to prove a difference, so avoiding over enthusiasm is important. Incorrectly proving a new intervention is effective may have far reaching consequences for patients, and it is important to first do no harm.

The Beta (or false negative rate) is usually set at a higher rate of 20%.

Why?… It is considered more acceptable to miss a true difference 20% of the time. This is because further studies should eventually show this important difference and it will be adopted at a later time. But the downside is that we may false reject important treatments, and deny patients to potential benefits of these treatments.

You want to calculate your sample size.

Q9. How many people will you need in your study?

(Hint – you already have your alpha and beta values above. You estimate a reasonable effect size to be 5 % points difference in happiness score. The standard deviation of the data is 6.)

To calculate sample size you need 4 pieces of information.

Using the powerandsamplesize.com online calculator, the calculated sample size is 24.

You complete your randomised controlled trial (RCT) and present the results to your friend. You don’t find any statistical relationship between coffee consumption and happiness in doctors. Thus your RCT doesn’t support your hypothesis, despite the promising observational data. You begin to slip into a nihilisitic ICU research fugue state… another “negative” trial… However your friend says you have now come of age as an critical care researcher and a dazzling future as a member of the ANZICS CTG no doubt awaits you!