You have been asked to review a 50 year-old man who has just been placed on VV-ECMO for necrotizing pneumonia.  The bedside nurse is concerned that there is something wrong with the chest drain.

Q1. What does this chest drain show?

There is an air leak present in inspiration and expiration.  A continuous air leak in an underwater seal chest drain is usually a “system leak” outside of the patient – often at the connection between the chest tube and the collecting system.

Q2. How can you diagnose a system leak?

Briefly clamp the tubing proximal (closer to the patient) to the connection.  If the leak continues there is a break in collecting system somewhere, if stops there is an ongoing air leak inside the chest.  This is a diagnostic test only and the clamp should only remain on for a few seconds – as if there truly is a large bronchopleural fistula causing the continuous bubbling, a tension pneumothorax will quickly ensue!

You clamp the drain just as it exits the patient’s chest and the leak stops!  You quickly unclamp the drain, having made a diagnosis and perform a procedure to try to treat it.

Q3. Describe the findings on this chest xray. Q4. What is a bronchial blocker and how does it work?

The Bronchial Blocker looks like a small foley catheter, and is inserted into the affected lung with bronchoscopic guidance if possible (blind insertion is possible though by rotating the tip clockwise or anticlockwise in an effort to direct it into the appropriate lung).  Once in position the balloon is inflated, thereby isolating the lung.   A special 4 way adaptor that comes with the bronchial blocker allows you to insert the blocker, use the bronchoscope and ventilate all at the same time. You’re not having much luck with the bronchial blocker so you decide to try something else.

Q5. What does the Chest X-Ray show? A left sided double lumen endotracheal tube has been placed with the bronchial lumen situated in the left main bronchus.  There is marked improvement in aeration on the left side. There is now dense consolidation of the right lung with mediastinal shift to the right.  The Right internal jugular ECMO cannula, Left internal mutual CVC, Right intercostal drain and Nasogastric tube remain in situ and appropriately positioned.

Q6. How does a double lumen tube work? 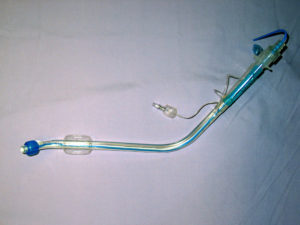 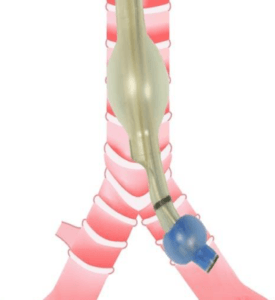 Q7. What is a bronchopleural fistula and what causes it?

It is an abnormal communication between the bronchial tree and pleural space. It is suspected when an air leak persists in a chest drain for more than 24 hours. In contrast, a small pneumothorax due to alveolar disruption may produce an air leak which promptly resolves with chest tube suction. Severity of air leak due to bronchopleural fistula can be limited to the inspiratory phase only, or extend to both phases of ventilation with a detectable difference in tidal volumes.

Causes of bronchopleural fistula include:

Management of established bronchopleural fistula involves minimizing further leak and allowing the fistula to close. Often bronchopleural fistula will resolve with treatment of the underlying disease. Low tidal volumes and cautiously applying PEEP is helpful. Furthermore, decreasing the I:E ratio will reduce any auto-PEEP generated by the patient. Isolating the lung with a bronchial blocker or double lumen tube can be used while the non-affected lung is ventilated. Other strategies include catheter directed balloon occlusion of the leak, coagulation with bronchoscopic laser and insertion of endobronchial one-way valve.