Nuts and Bolts of EBM Part 4

This study says this, that study says that. Wouldn’t it be great if we could somehow combine trials together to try to get closer to the truth?

However, as clinicians and burgeoning connoisseurs of ‘the evidence’, there are a few things we need to know to avoid being led astray.

Q1. What is a systematic review and what is a meta-analysis… How do they differ?

A systematic review is review of a clearly formulated question using systematic and explicit methods to identify, select and critically appraise all relevant research. Data is collected and analysed from all the studies that are included in the review.

Meta-analysis, on the other hand, is the process of using statistical methods to combine the samples and analyse the results of the included studies. The overall sample size is increased, thereby improving the statistical power of the analysis as well as the precision of the estimates of treatment effects.

Q2. What are the steps involved in performing a systematic review and meta-analysis?

In brief, the 7 key steps involved are:

Q3. What are the benefits and limitations os systematic review and meta-analysis?

A systematic review of well-performed randomised controlled trials is regarded as the highest level within the evidence hierarchy (see Levels and Grades of Evidence in the LITFL CCC).

Q4. Describe a useful approach to critically appraise a systematic review and meta-analysis?

The University of Oxford Centre for Evidence-Based Medicine has a suggested method for critical appraisal of systematic review and meta-analysis. The Worksheet can be found here: http://www.cebm.net/wp-content/uploads/2014/06/SYSTEMATIC-REVIEW.docx

In summary, the review should be appraised using the PICO format and fulfil all 5 criteria of the FAITH tool.

Q5. What are funnel plots and how are they interpreted?

A funnel plot is a scatter plot of the effect estimates from individual studies against some measure of each study’s size or precision. Traditionally the funnel plot was used to assess for the presence of publication bias or selective outcome reporting (relevant to the F part of the FAITH tool).

The standard error of the effect estimate is often chosen as a measure of the accuracy of the predictions of the study. This is plotted on the vertical axis with a reversed scale that places the larger, most powerful studies towards the top.

The effect estimates from smaller studies should scatter more widely at the bottom, with the spread narrowing among larger studies. 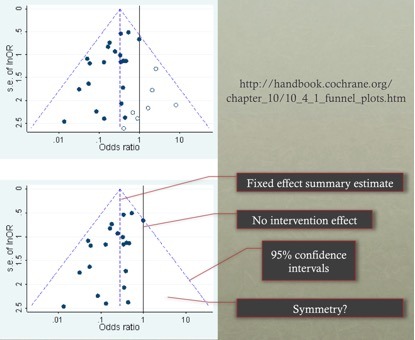 NB. The article by Sterne (BMJ 2011) summarizes funnel plots and is where the CICM exam sought their answer for SAQ 2014.2 Q13.

Q6. What are forest plots and how are they interpreted?

A forest plot is a diagram that shows information from the individual studies that went into the meta-analysis and an estimate of the overall results (relevant to the T and H parts of the FAITH tool). Interpreting a forest plot requires knowledge of the two stages of performing meta-analysis.

Greater weights are given to the results from studies that provide more information, because they are likely closer to the “true effect” we are trying to estimate. The weights are often the inverse of the variance (the square of the standard error) of the treatment effect, which relates closely to sample size. 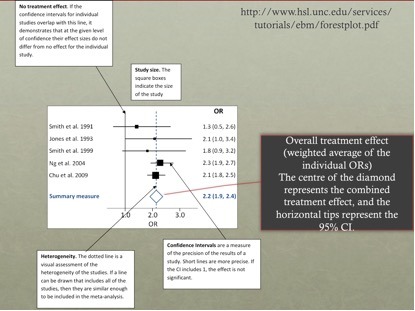 Q7. How is heterogeneity represented in a meta-analysis?

Heterogeneity (or statistical heterogeneity) refers to variability in the intervention effects being evaluated in different studies included in a systematic review as a consequence of clinical or methodological diversity, or both, among the studies. This becomes manifest as the observed intervention effects being more different from each other than one would expect due to random error (chance) alone.